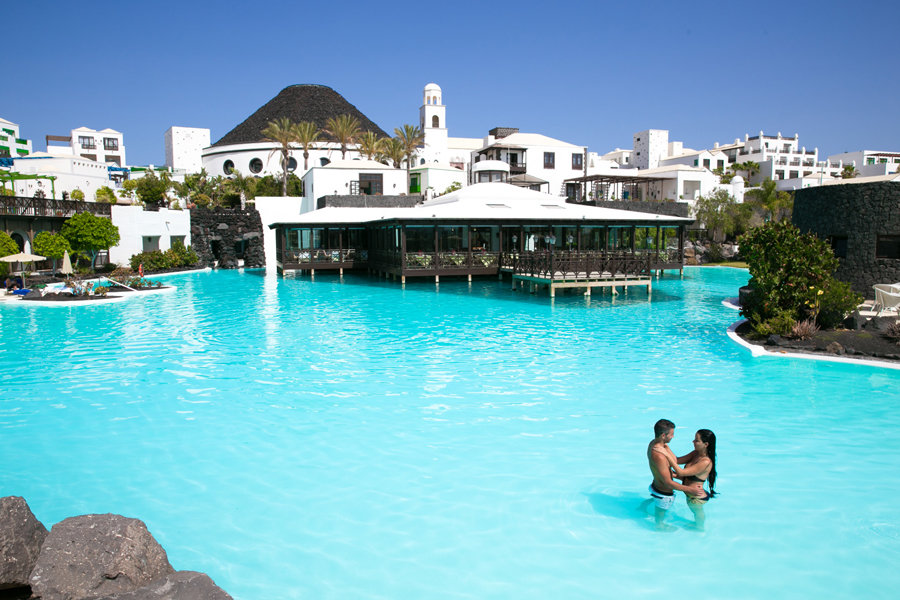 This hotel has been designed to resemble a typical Canarian village. The entrance is modelled on a local church, and the grounds are defined by sunny courtyards and whitewashed buildings coated in ivy.

Lanzarote is also known as the island of eternal spring with an average annual temperature of 21ºC. The sky is blue every day of the year and is bathed in the pale light of the glowing moon at night.

Lanzarote is the most easterly of the Canary Islands and is characterised by the many volcanoes that cover its surface. Underwater and moon-like landscapes, transparent waters, parched land, palm tree oases, man and nature living side by side in harmony. Undeniably it is a land of contrasts.

This five star hotel, Hotel THe Volcán Lanzarote, has a prime location on the seafront and together with the “Marina Rubicón” yachting harbour it constitutes a tourist resort in the southern part of the island – an area that forms part of the UNESCO’s “World Network of Biosphere Reserves”.

The hotel is located just 10 km from the Timanfaya National Park, 900 metres from the picturesque fishing village of Playa Blanca, where you will find shopping centres, bars and restaurants, and just 30 minutes from the International Airport of Arrecife.

Andrés Piñeiro, the chief architect of the project, chose a design based on a complex of classical buildings that are a true reflection of the typical architectural style of the island. The design of the hotel is reminiscent of a typical village of Lanzarote, with romantic patios, traditional courtyards and secluded spots, together with the magnificent hotel entrance which is a replica of the Teguise church of “Ntra. Sra. de Guadalupe”.

With its unique architecture and the distinguished service of a 5 stars hotel, Hotel THe Volcán Lanzarote is an icon within the high end segment of the tourism sector.

A poolside bar and evening bar are available for drinks.

This buffet restaurant is open for breakfast and dinner.

This restaurant is open for dinner. Remember to book a table the night before.

You'll find Italian classics for dinner on offer. Don't miss out, book yourself a table the night before.

Head here for lunch, they serve up tapas and a range of international cuisine.

Tennis, aqua aerobics and giant chess are among the activities on offer for adults. Little ones, meanwhile, can look forward to fun and games at the hotel-run kids’ club.

Three bars are on hand for drinks. You can catch live music several times a week, too.

A lake-sized pool takes pride of place in the grounds, fringed by palm trees, tropical plants and a hot tub. Cushioned loungers and wooden cabanas surround this and the two smaller pools.