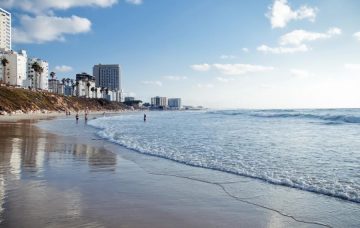 Leonardo Suite By The Beach

Offering panoramic sea views, Leonardo Suite is set a 2-minute walk from the beach in Bat Yam, 8.1 miles south of Tel Aviv. Its spacious suites are complete with sea-view balcony, dining area with kitchenette, and a living room.

We have an exclusive offer on for Leonardo Suite By The Beach. Read More

At Going Luxury this weekend we have a wonderful trip to historic Israel available featuring deluxe, beachfront accommodation with superior rooms & panoramic sea views, a choice of tour to iconic landmarks & an option to extend your break & make it a twin-centre stay!

With this brand new tour you can fly to Tel Aviv & check-in to a beachfront luxury hotel at the Leonardo Suite by the Beach for a 7-night stay from just £699pp.

It is possible to make your Israel stay a twin centre by adding a visit to beautiful Eilat on the stunning Red Sea Riviera. You can stay for additional nights at the well-reviewed Leonardo Privilege Eilat on an all-inclusive board basis. 10-night breaks are available from just £999pp, please contact us for a bespoke quote that can be tailored to your needs.

Other dates/durations available, please use our live chat service or call our friendly travel advisors for more details and to book.

On the coast overlooking the Mediterranean Sea, the Leonardo Suite By the Beach offers its guests spacious suites with beautiful views, as well as comfortable superior rooms.

Settle back and enjoy a light snack in the coffee shop or a refreshing drink in the lounge bar. Breakfast is served at the "seven on heaven" restaurant, located on the 7th floor.

Spend some relaxing hours on the sun deck or at the outdoor swimming pool, located right next to the breakfast restaurant.

Profit from the direct access to the beach and listen to the sound of waves to forget all daily stress. The Spa Centre and the fitness club ensure pure relaxation.

About Leonardo Suite By The Beach

On the coast overlooking the Mediterranean Sea, the Leonardo Suite By the Beach offers its guests spacious suites with beautiful views, as well as comfortable superior rooms.

Settle back and enjoy a light snack in the coffee shop or a refreshing drink in the lounge bar. Breakfast is served at the “seven on heaven” restaurant, located on the 7th floor.

Spend some relaxing hours on the sun deck or at the outdoor swimming pool, located right next to the breakfast restaurant.

Profit from the direct access to the beach and listen to the sound of waves to forget all daily stress. The Spa Centre and the fitness club ensure pure relaxation.

Our day begins at the Mount of Olives with a breathtaking panoramic view over Jerusalem then we continue on to the Byzantine Cardo, an ancient main road which runs through the Jewish Quarter of the Old City of Jerusalem. We take a look at the Wailing Wall (Kotel) and then follow the sacred route Jesus took carrying his cross along the Way of Sorrows (Via Dolorosa). We stop as several of the Stations of the Cross and reach the Basilica of the Holy Sepulchre where Jesus was crucified and where his burial tomb is located. We take a stroll through the bazaars of the Christian and Moslem Quarters and then depart Jerusalem and make our way to Bethlehem.
In Bethlehem, our main focus is the Church of the Nativity where Jesus was born.

Our journey begins at the Mount of Olives overlooking the ancient Jewish cemetery where it is believed that the resurrection will begin when the Messiah comes (Zech 14:4). From this elevated location we can see across the Old City and down to Temple Mount where the Holy Jewish Temple once stood.

We continue on towards the Zion Gate by driving passed the Garden of Gethsemane, the Church of All Nations and the Kidron Valley where we see the Jewish burial tombs of Absalom, King David’s son; Jehoshaphat and the Hezir family (benei Hazir). At the Zion Gate we enter Jerusalem’s Old City and make our way through the Armenian Quarter. Then we follow the 1500 year old excavated Byzantine Cardo which has been restored and is now home to modern shops which line a section of the ancient road.

We carry on through the Jewish Quarter and on to the Western Wall which was part of the outer walls of the Holy Jewish Temple that stood on Temple Mount almost 2,000 years ago.
We then walk where Jesus once walked the Way of Sorrows along the Via Dolorosa, as thousands of pilgrims do each year. We stop at several of the Stations of the Cross where Jesus stopped briefly as he carried his cross to Golgotha (Calvary). The final station on the Way of Sorrows is at the Church of the Holy Sepulcher marking the site where Christ was crucified and where his burial tomb is located. The Basilica was constructed during the Byzantine Era and underwent renovations and reconstruction over the years.

Before we leave the Old City we meander through the typically Middle Eastern markets and then set off for Bethlehem, the city of Christ’s birth.

We arrive in the City of Bread, Bethlehem, which was home to Jesse, King David’s father as well as being Christ’s birthplace (Matthew 2:1). From Manger Square we enter the 4th century Church of the Nativity which is the oldest church in Israel still in use. Beneath the church is the Grotto of the Nativity where a star indicates the place where Jesus was born. Also in the Orthodox Church is an alter dedicated to the Three Wise Men. This is the place where the well-known story of Christmas night took place and a visit here is a moving experience for all Christians.

The Church of the Nativity was neglected for centuries following the expulsion of the Crusaders and was also damaged by an earthquake and fire. However during the British Mandate and more recently under Israeli authority the church has been restored and repaired.

On the way out of the church we see the Armenian Chapel of the Kings or Magi and we visit the Crusader Church. From the Church of St. Catherine we go down into a two room cave which connects with the Grotto of the Nativity. It was here that Saint Jerome spent 30 years translating the Hebrew Bible into the Latin version called The Vulgate. This is the perfect place for us to take a moment and sing some Christmas carols.

In Luke 2:8-11 we read of an angel appearing to shepherds who were tending their sheep in a nearby field. We stop to see Shepherds Field, and the contemporary Church of the Angels designed by Antonio Berluzzi with panels retelling the story of Jesus’ early life.
On our way back towards Jerusalem we pass the Field of Ruth. Here Ruth, King David’s great grandmother worked in the fields of Boaz. (Ruth 2:1).

We begin our tour by traveling passed Herzliya and Natanya and continue north along the coastal road parallel to the Mediterranean, we turn inland and drive through the Valley of Armageddon (Revelations 16:6), from here we can see Megiddo. On our way towards Nazareth we visit the Mt of Precipitation (Luke 4:28-30).

In Nazareth we visit the Church of Annunciation which was constructed on the spot where Gabriel appeared to Mary and told her she would soon be with child (Luke 1:26). Next door we find the Church of Saint Joseph built on the site where Jesus’ father, Joseph had his carpentry.

We depart Nazareth and travel to the Sea of Galilee on the way we pass Cana where Jesus turned water into wine. (John 2:1-12). At the foot of the Mount of Beatitudes we visit Capernaum on the shore of the Sea of Galilee. Here we see the home of Peter and the Church of the Multiplication. (Mark 6:30-44)
We travel along the shore of the Sea of Galilee where Jesus calmed the sea and walked on water. (Mark 4:35-41, 6:45-52) Across the water we can see the Golan Heights forming a beautiful backdrop as we pass the city of Tiberias which was settled more than 2000 years ago and named after the Roman Emperor Tiberias.
We reach the southern region of the Sea of Galilee where the Jordan River flows into the Sea of Galilee and where Jesus may have been baptized. Here it is possible to participate in a baptismal ceremony in the very same river that Jesus did so many years ago. (Mark 1:9-11)
As we head south on our return journey we see Mount Tabor where the Transfiguration took place. (Matthew 17:1-9)

Stop for a drink at the main Hotel bar.

The Leonardo Suite Bat Yam offers its guests several dining possibilities with its two restaurants, coffee shop and bar. the breakfast restaurant serves kosher dairy delicacies. If you prefer a light snack the charming “Kakao” café is at your disposal, with its beautiful terrace.
Rooms
Facilities

Spend a relaxing day at the Spa and leave behind all worries, enjoy the warm desert sun in our sundeck or spoil yourself with a traditional massage. For the more active guests the fitness centre offers professional facilities to suit your needs (for an extra charge). The gym is fully equipped with professional facilities and a skilled and experienced staff. The gym offers a variety of sports fitness equipment, including treadmills, cross trainers, and weights.

The Leonardo Suite Bat Yam's swimming pool is open during summer. The pool located on the 7th floor and overlooking to the sea waterline. There is no toddler pool at the hotel.