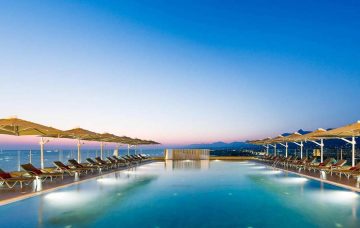 Located near the New Harbor of Kyrenia, Lord's Palace Hotel is a 5-star hotel and close to local amenities such as the Kyrenia Harbour and Castle. Bustling Kyrenia is backed by a narrow band of mountains, a horse-shoe shaped harbour filled with boats and yachts all flanked by a water-side promenade with lively restaurants, bars and tavernas.

The Lord’s Palace Hotel offers a contemporary blend of classic elegance and subtle splendour. Based in the heart of Kyrenia Town, complete with an incredible rooftop pool boasting panoramic views, this slick hotel warmly welcomes its guests to relax in its classy, Mediterranean Seafront abode.

With its striking exterior and cool-elegant interiors, the 5-star Lord’s Palace Hotel commands great views over the new harbour at Kyrenia, especially from its rooftop swimming pool. This new hotel opened in May 2016.

Lord’s Palace Hotel in the heart of Kyrenia offers rooms that provides all the amenities for a comfortable lifestyle. With the view of the surrounding Mediterranean, the Beşparmak Mountains and Kyrenia’s favorite entertainment street, Bella Marin, Lord’s Palace stands out in comfort and style among Cyprus Hotels.

Bella Marin, the island’s entertainment street, is an area where many restaurants, bars, a splendid two-story pool, a Japanese-style spa centre, a lounge, shops and entertainment venues are all located together under the same roof.

North Cyprus was a gift bestowed upon Queen Cleopatra by Julius Caesar as a token of his love. No more fitting a gift could be found for this sun-drenched jewel in the eastern Mediterranean, which is covered with the relics of ancient civilisations in a setting of incomparable beauty. Northern Cyprus is one of the few places in the world yet to be discovered by mass tourism – when you step onto its shores it seems as if you have gone back in time. Uncrowded sandy beaches, picturesque villages, quayside restaurants and cafes are but a few of the attractions of this enchanting island.

Historically, the location of this island has always tempted conquerors, from the Persians to the Romans and the Byzantine, each leaving their own indelible mark. One of the most remarkable sights is the Salamis Ruins near Famagusta. These exceptionally preserved ruins were founded by Teucer on his return from the Trojan wars. Other unique sites include an array of museums, notably the Abbey at Bellapaise, and the magnificent St. Hilarion castle on Mount St. Hilarion near Kyrenia. This was one of the inspirations for Walt Disney’s fairytale castle and is also the place where Richard the Lionheart is reputed to have been married. The key to a holiday in Northern Cyprus is relaxation, for this is a country to which time does not apply.

This Cafe can also be found on the ground floor, is the ideal solution for those moments when you want to take a break. A Long list of hot and cold drinks as well as alcoholic beverages and snacks.

Located on the hotel panoramic terrace offering stunning views of Kyrenia .This the beautifully designed bar has a full a la carte menu created by our talented chefs, enticing drinks with a variety of local and world famous wines and champagne for those who want to enjoy the scenery relax are available. Live DJ performances take place 3 times a week a perfect way to enjoy the warm summer nights.

Located in the heart of the garden our A la Carte Restaurant serving a range of specialities such as cooked fish and meat over hot coals.

This restaurants convenient location across from the lobby on the ground floor, "spices from all over the world" gives a complete visual feast .The restaurant offers breakfast and dinner, with an open kitchen and buffet.

On the Mediterranean coast, 470 meters of breathtaking beauty. The restaurant catering for all guests has pizza, hamburgers, snacks, ice cream and large alcoholic / non-alcoholic drinks available. It is open from 11:00 to 17:00.

Lord's Spa has fully trained and experienced staff to give customers a choice from a range of massages. Relax in the sauna and indulge yourself in one of our massages. The best spa for those guest looking to relax and escape to tranquillity .The spa is open from 10:00 - 21:00. A range of therapies, treatments and massages catering to all customers’ needs.

Lords casino has a total of 260 slot machines working 24 hours a day as well as 21 live table action games. Catering to Texas Holdem Poker Games and Roulette tournaments as well as Live Horse and Dog Racing and sports with Butler Service.