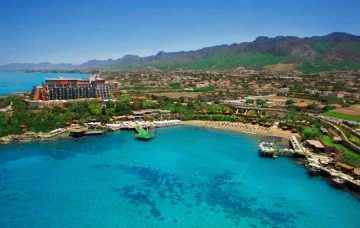 A beach front hotel offering a good range of facilities and services in a ideal location for families and beach lovers.

We have an exclusive offer on for Merit Crystal Cove. Read More

Certified Gold: Official 5-star properties that excel where their contemporaries lag with excellent reviews, usually award winning & a taste for the finer things in life.
From
£599 per person
Limited Availability
ATOL Protected

At Going Luxury we have a special offer for this Northern Cyprus break! You can stay for 7-nights at the popular Merit Crystal Cove on an all-inclusive board basis from just £599pp!

Travel in low season for the best prices, other dates available at supplements. Known as the 'year round island,' Cyprus is great for winter sun!

Please call our UK based luxury holiday experts for details & to book.

Take a break from the breath-taking beaches and explore the rest of North Cyprus. Head to the narrowest point of the island, Karpaz Peninsula, and discover gorgeous ruins and unbelievable, rugged scenery covered in cypress and pine trees. Head here in July or August to watch the birth of loggerheaded turtles. Walk along the same path as the ancient Greeks and Romans at charming coastal ruins like the ancient city and palace of Vuni, and the Roman cities of Lapta and Soli in the west.

Discover the Kantara Castle, one of three in the Five Finger Mountains that were built by the Byzantines to fortify the island, and first mentioned by Richard the Lionheart. Long since deserted, the castle makes a wonderful spot to look out on the Mediterranean. North Cyprus also has several historic churches scattered across the countryside, one of which is the Ayios Philon Church perched on the north coast and dates to the 4th century.

Whether you want to discover the marine world, remnants of the past, or just have a lie in on the sand, you’ll be swept away by your holiday in North Cyprus.

The Crystal Restaurant, which serves an open buffet, is on the same floor as the lobby. The Crystal Restaurant, offering options for a wide range of palates ranging from diet food to natural delicacies, the freshest fruits, and organic vegetables, is an unmatched location to enjoy the view of the blue waters of the Mediterranean. Special evenings with gourmet delicacies selected from world cuisines are held on certain days of the week at Crystal Restaurant.

The Lambusa Restaurant is located on the sixth floor of our hotel.

Ottoman Kebab House is the only establishment that gives the true delight of Southeastern-style kebab while also allowing you to make your own kebab. And in its private wine cellar, you may find something special that suits your palate.

Merit Casinos is a group of casinos held by Voyager Cyprus, a Net Holding enterprise. Not only are we the only organization in Northern Cyprus offering a wide range of gaming services (out of Girne and Lefkoşa), we also pride ourselves on our skilled employees who hold international experience in their respective fields and provide a high-quality gaming environment and service.

On an area of roughly 1,500 square meters, everything you need for physical and spiritual relaxation-massages, skin and body treatments, a fitness center, Turkish baths, 2 private Turkish baths, indoor swimming pool, saunas, a steam room, and a served by our crew with experience in their respective fields-can be found at our spa center just for you. We will be delighted to give you this experience.

We'll call you back in 5 minutes

0207 030 3960
We use our own and third party cookies. If you continue browsing we consider you accept the use of cookies.
Accept