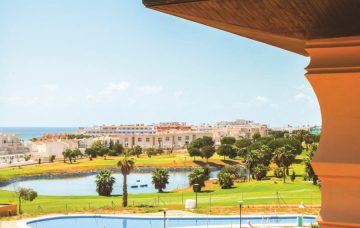 Mojácar on Spain’s southeast coast is divided into a “popular beach resort” with a 4-mile-long sandy beach and a “charming hillside town” with an “attractive historic centre” (Lonely Planet). At Alegria Palacio Mojacar we invite you to enjoy a charming beachside hotel: this former palace of the Marquis de Chávarri dates back to 1907 and is guaranteed to make you feel like a true aristocrat during your vacation in the south of Spain.

The Alegria Palacio Mojacar pairs a quiet, adults-only environment with a close-to-the-beach setting. This luxury hotel has put down roots on the site of a former palace. As such, you can expect privileged views over the sea and a landscaped golf course and it’s just five minutes’ walk to the beach. The hotel is surrounded by plenty of greenery, so it’s a really peaceful place to stay. Within the grounds, you’ll find a good-sized pool, a buffet restaurant, plus a spa to unwind in.

When to Travel to Alegria Palacio Mojacar

The adults-only Alegria Palacio Mojácar is a 10-minute walk from the beach, with sea views. The hotel is on the Costa de Almería, half a mile from the Marina Mojácar golf course. It’s a 15-minute drive from Mojácar Pueblo (the historic part of Mojácar), a whitewashed hilltop village with “winding streets”, “mellow bars, galleries and intriguing small shops” (Lonely Planet).

Surrounded by landscaped gardens, the Alegria Palacio Mojácar has a gym, an outdoor pool and a terrace with sun loungers. There is also a cocktail bar and a cafe. WiFi is free.

The town of Garrucha, with its marina lined with bars and restaurants, is a 10-minute drive away.

Alegria Palacio Mojacar is surrounded by a golf course and is located mere steps from the sea. Also, if you’ve come to relax, the hotel features a modern spa where you can pamper yourself for as long as you want. One of our secrets? The hotel is for adults only.

Each room has air conditioning, as well as a satellite TV and a telephone. A paid safe and minibar are also available. Private bathrooms include a bath or shower, hairdryer and free toiletries.

Alegria Palacio Mojacar has a bar and restaurant. There is also a spa and a sauna where guests can relax. Staff at the 24-hour reception can organise a shuttle service for an extra cost.

Club Marina Golf Mojacar is 900 yards away. A selection of shops, bars and restaurants are within 5 minutes´ drive. Mojacar is 3.1 miles away and Almeria is 1 hour by car. Almeria Airport is 51 miles away.

Discover what to see in Mojacar and get to know one of the most charming towns of Spain.

In 2003, the white town of Mojacar was declared one of Spain’s prettiest towns and it is no wonder why. It is located on a hilltop, 170 metres above sea level, at the end of Sierra Cabrera, on the eastern side of Almeria province. It’s definitely the perfect area to spend your holidays!

It is composed of two parts: Mojacar Pueblo (the town) and Mojacar Playa (the beaches). The beaches of Mojacar are some of the most appealing seashores of Almeria. Of the 17km worth of virgin and touristic beaches, 7km have been granted the Blue Flag, so they are worth a visit, especially if you know that they are part of the magnificent natural park of Cabo de Gata.

For snacks and refreshments, there’s also a chilled-out bar right by the pool.

The hotel’s contemporary main restaurant is a great spot to enjoy a bite with family or friends, with a choice of delicious local and international fare to sample.
Rooms
Facilities

In the spacious outdoor complex, there’s a large free-form pool just waiting for you to take a dip, with a smaller pool nestled alongside. For fitness fans, there’s also a well-equipped on-site gym – and for a local charge, endless relaxation is on offer at the stunning spa, which offers cosy saunas, an indoor pool, sensory showers and a range of luxury treatments. Plus, to keep connected, free Wi-Fi access is available throughout the complex.