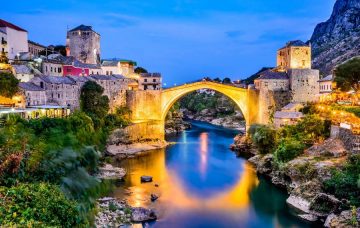 The Balkan Attraction Private Tour takes you to the most important sites in these ancient countries using 4-star hotels for leisure comfort. Fly into Dubrovnik and out of Zagreb with 1-night in luxury hotels each side of this incredible tour. There are options to extend stay at hotels in either or both of these incredible cities.

This trip is one of our ‘Bucket List Tours’ which we have carefully compiled. These are our top suggestions for an unforgettable trip of a lifetime. Flexible tours, durations and dates that can be tailored to your specific needs. Looking for a trip of a lifetime? We have access to a plethora of worldwide destinations, some not even listed on our site yet, with escorted tours and excursions included. Get in touch with our experts with your requirements and let them tailor your perfect holiday of a lifetime.

This eight-day Balkan Attraction Tour will show you the real beauty of the Balkans. Visit the most important cities in Croatia, Bosnia and Herzegovina and Serbia. Departure from the banks of the Adriatic Sea in Dubrovnik and continue towards picturesque Mostar and the ‘European Jerusalem’ of Sarajevo. Enjoy the walk through the high energy city of Belgrade and finish the tour in the cosmopolitan Croatian capital, Zagreb.

When
Travel during May & September for the best prices. Other dates available from small supplements. Tour can be extended or shortened & tailored to your needs, contact our luxury hotel experts for a bespoke quote.

Highlights
Dubrovnik: Protected by magnificent medieval walls, the atmospheric capital of the historic Republic of Ragusa is a treasure trove of palaces and churches.
Mostar: This enchanting medieval town will win your heart over with its picturesque stone arc bridge.
Sarajevo: Bosnia’s welcoming capital city has been restored to its former glories and is known as the ‘Jerusalem of Europe’ due its cultural and religious offering.
Belgrade: Translating as ‘White City’, Belgrade is a colourful experience. Enjoy the vibrant heritage of the Serbian capital city.
Zagreb: The dynamic capital of Croatia is the largest in the country, boasting fantastic examples of Austro-Hungarian architecture and a high quality of life for its residents.

The Balkans Peninsula covers a good part of Europe and is one of the oldest settlements in the continent. No wonder it is one of the most popular tourist destinations, as it features numerous historic towns and natural wonders. From mountains to pristine beaches, from ancient buildings to luxurious resorts – there is something for everyone’s taste.

Drinks will be chargeable from the Hotel bars respectively.

You will be staying at 4-Star superior hotels so you can expect all of the facilities of a Hotel of this calibre.