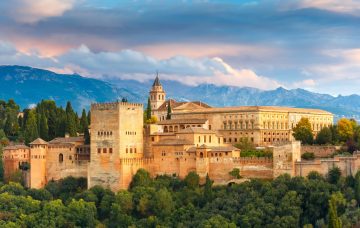 Experience the best of mighty Andalucia in the south of Spain with this carefully crafted tour. Included is a beach stay in a luxury hotel in a resort of your choice. Along with guided excursions to visit the cities of Sevilla, Granada & Cordoba as well as optional visit to Ronda.

This trip is one of our ‘Bucket List Tours’ which we have carefully compiled. These are our top suggestions for an unforgettable trip of a lifetime. Flexible tours, durations and dates that can be tailored to your specific needs. Looking for a trip of a lifetime? We have access to a plethora of worldwide destinations, some not even listed on our site yet, with escorted tours and excursions included. Get in touch with our experts with your requirements and let them tailor your perfect holiday of a lifetime.

Travel winter sun dates (October to March) for the best prices. Other dates available from small supplements. Tour can be extended or shortened & tailored to your needs, contact our luxury hotel experts for a bespoke quote.

Sevilla: For centuries, Spanish conquistadors set off on their voyages of discovery from Seville, Europe’s foremost gateway to the New World. Now you can discover the old world charm of the capital of Andalusia, an elegant and cosmopolitan city that will keep you enthralled and your photo album full. Seville has a special colour, a popular Spanish song claims, and you will see just why from the ornate tiles of the Plaza de España, which will be familiar to Star Wars fans, to the golden hue of the Giralda, the belfry of Seville Cathedral that began life as a mosque’s minaret. Your specialist local guide will help you uncover the history surrounding the cathedral, the third largest in Europe, with its magnificent altar and the tomb where Christopher Columbus is said to be buried. Adjacent to the Cathedral is a picturesque patio dating from Moorish times that houses orange groves. During the tour through the narrow, winding streets of Santa Cruz, the old Jewish Quarter, discover hidden squares and courtyards cooled by fountains and orange trees. And if you’re lucky, you may even chance upon a lone flamenco guitarist, strumming a hauntingly beautiful tune. Admire the refined renaissance architecture of the General Archive of the Indies, which is one of three Unesco World Heritage Sites in the Seville; the others being the cathedral and the Moorish Alcazar, Europe’s oldest royal palace. With so much to see and do, this beautiful city is an absolute must for any visitor to Andalusia. The trip to Sevilla lasts around 3 hours with a coffee break on the way. You’ll get to Sevilla at about 11am. You’ll leave Sevilla at around 4pm and get to your hotel between 7pm and 9pm.

Cordoba: Immerse yourself in this ancient melting pot of cultures with this fascinating full-day tour to Cordoba, where Christianity, Islam and Judaism thrived and coexisted peacefully. Now a bustling provincial capital, Cordoba was once the largest city in the world, a vast multicultural centre of learning. On this full day guided tour, you will be dazzled by the colourful patios, enchanted by the narrow alleys bedecked with plants and awestruck by the elaborate beauty of the religious architecture. The city also has a wealth of Roman remains, with the ruins of a temple and a mausoleum in the centre and a 2,000-year-old, 16-arch bridge spanning the River Guadalquivir. But it’s the monumental Mosque-Cathedral, a Unesco World Heritage Site, which is the city’s most famous attraction. Wander through a maze of magnificent Moorish arches and pillars to discover the stunning Catholic cathedral built at the centre of this truly captivating religious building. Stroll through the old Jewish Quarter and see the synagogue, with its intricate Arabesque décor. Lose yourself in the labyrinthine streets around the Mosque-Cathedral and suddenly find yourself in historic plazas that are mentioned in Don Quixote. Be mesmerised by cool little squares, offering shade from the blistering sun, and redolent with plants and flowers. Marvel at the medieval churches and renaissance, and baroque palaces. Relax in the peaceful landscaped gardens of the Alcazar of the Christian kings.

Granada & The Alhambra: Take a step back in time and discover one of Spain’s greatest treasures, the Alhambra of Granada. See the opulence in which medieval Muslim princes lived with this guided tour of a palace complex that was described by contemporary poets as a ‘pearl set in emeralds’ and has long been considered the ‘eighth wonder of the world’. The Alhambra is set in a stunning location overlooking the city and nestling at the foot of the snow-capped Sierra Nevada. Considered the finest example of Arab architecture in Spain, the palace and its gardens were built to be ‘heaven on earth’, with cool patios, fountains and intricate carvings still as clear as when it was first built. Marvel at the elaborate beauty of the Royal Complex, where you will find rooms decorated in honeycomb Arabesque plaster work, such as the Court of the Myrtles and the Hall of the Ambassadors, and the architectural and hydraulic engineering gem that is the Court of Lions, which Islamic poets said was the physical realisation of paradise. Stroll over to the Generalife Palace and its lush gardens, where the Muslim emirs retreated at summer to relax to the soothing sound of water. Take advantage of some free time in the city centre, where you may visit the impressive Cathedral and Royal Chapel or wander through the spice market. Return to the coast with your senses alive with scented gardens and images of Arabian nights.

Ronda & Costa de la Luz Tour: (Optional tour £45pp) Begin your tour with a wealth of contrasts: fields of crops, valleys, hillsides and typical white villages. From Cuevas del Becerro venture into the province of Cadiz, to discover one of its prettiest villages: Setenil de las Bodegas, which is famous for having many of its houses built into the rock, and known locally as “shelter under the rock”. Approximate duration of the walk: 45 minutes. After your walk, you will return to to the province of Malaga, namely Ronda, where you will take a stroll through the Alameda gardens and the balconies overlooking the Tagus river, and pass by the Bullring, one of the oldest in Spain. Time for a traditional aperitif at one of the town’s most prestigious bars. Cross the New Bridge, with its spectacular views over the Tagus river, and hike to the Medina, or old Moorish quarter, with its narrow streets and little squares, where you will visit a 19th-century Palatial Home. Lastly, delve into the heart of the old town, the Plaza Duquesa de Parcent square, where the Church of Santa María la Mayor and the Town Hall are located, among other emblematic buildings. Approximate duration of the tour: 2 hours We will return to the market area, where you can enjoy some free time for lunch and shopping. On the back back, the tour will take you on a route from Ronda to San Pedro de Alcántara (Marbella), which will offer you fantastic mountainous landscapes with a range of colour contrasts due to the wide variety of native botanical species in this area.

Drinks will be chargeable from the Hotel bars respectively.

You will be staying at 4-star superior Hotels so you can expect all of the facilities of a Hotel of this calibre.