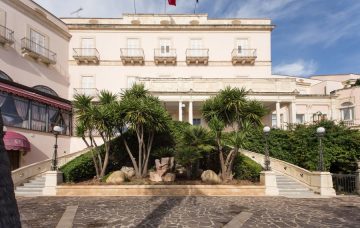 Grand Hotel Villa Politi 1862 is situated in the centre of romantic Siracusa & a spectacular, natural amphitheatre, within the ancient Sicilian quarries known as the Latomie dei Cappuccini.

The Grand Hotel Villa Politi 1862 in romantic Siracusa is an extensive hotel with luxury guest rooms, state of the art meeting and conference rooms, a spectacular outdoor pool surrounded by verdant parkland and a top quality restaurant and bar.

Don’t leave us without getting a quote or some help finding your next holiday. Whether you want a full package holiday or just the hotel, it’s so easy to get in touch with our friendly experts via email, live chat or phone, we are always here for you. This includes after you book. We don’t hide, in fact, we love to hear from our customers and make it easy to get in touch. You can’t say that about many companies these days. Bear in mind too, that we are a company that guarantees a refund if your holiday is cancelled due to government advice. Not many travel companies can say this, just search it up online to read the stories. We are ABTA & ATOL bonded & regulated, which means that we are financially safe and governed by a body. This is be becoming a rarity too, as other travel companies are leaving ABTA, seemingly so they can ignore their responsibilities. Again, search it up if you want to read more. So… what are you waiting for? We are the perfect travel company to book with! Get in touch and let us take care of everything for you.

GRAND HOTEL VILLA POLITI 1862 – At Going Luxury we constantly receive special offers for this delightful property. Get in touch with us via live chat, email or phone to check the latest offers for your holiday requirements.

One of the most famous hotels in Italy, this unique villa that literally sits atop both historical and naturally occurring landmarks offers an unrivalled luxury holiday experience on the coast of one of Sicily’s most beautiful and enigmatic ancient cities.

At Going Luxury we have an incredible opportunity for a romantic break to one of Italy’s most famous hotels! You can stay at the renowned Grand Hotel Villa Politi 1862 in the gorgeous setting of Siracusa in Sicily from just £299pp for 7-nights.

Other dates/durations available, please contact our friendly ‘luxury holiday experts’ for more details and to book.

The Grand Hotel Villa Politi 1862 makes available to its honoured guests as many as 100 rooms and suites of different types and sizes, the only hotel in the heart of Syracuse with a large outdoor swimming pool, two bars, lush parkland and two restaurants offering high quality cuisine.

The Austrian noblewoman Maria Teresa Laudien in 1862, after she met the man of her life, Salvatore Politi, Syracuse’s painter, founded Villa Politi, which quickly became an international leader thanks to its style and subtlety. It is and has been a meeting place for Art, Culture, Politics, Nobility: Princes and Kings from all over Europe, D’Annunzio, Ojetti, Vergani, Sir Winston Churchill, Pope John Paul II, President of the Italian Republic Carlo Azeglio Ciampi, the Italian Prime Minister Matteo Renzi and fascinating women such as Monica Bellucci.

The Grand Hotel Villa Politi 1862 is itself a part of Syracuse’s rich history, thanks not only to its unique location in the Latomie dei Cappuccini but also to the villa itself, a former noble residence, frequented by a string of notable historical figures, heads of state and other dignitaries. The Austrian noblewoman Maria Teresa Laudien in 1862, after she met the man of her life, Salvatore Politi, Syracuse’s painter, founded Villa Politi, which quickly became an international leader thanks to its style and subtlety. It is and has been a meeting place for leaders in Art, Culture, Politics, and even Nobility with Princes, Kings, Presidents and Prime Ministers from all over Europe, having stayed here. A list of some of the dignitaries who have stayed here can be found below.

Perched over the sparkling southern Mediterranean Sea, this historic 4 star hotel in Sicily was used as a base by Winston Churchill during the allied invasion of Italy. Today, the Hotel Bar is named after Sir Winston Churchill, as is one of our five Meeting & Conference Rooms. Winston Churchill said during his holidays in April of 1955 “I never rested so well in my life”. Edmondo De Amicis had similar emotions when he wrote in 1906 of his “delicious hours… spent on the terrace of the Grand Hotel Villa Politi – ah this elegant villa that rises above the ancient ruins on rocks used by the Greeks thousands of years ago… Syracuse seen from this terrace seems floating as if sleeps, dreaming on the two thousand and seven hundred years of history”.

The extensive 4 star hotel complex of the Grand Hotel Villa Politi 1862 covers a large area of the Latomie dei Cappuccini archaeological zone and sits atop the cliff face of Siracusa to offer spellbinding panoramic views of the Mediterranean Sea. The main part of our exclusive luxury hotel in Siracusa contains precisely 100 spacious and elegantly preserved guest rooms (53 with sea view – subject to availability), all restored to their original 19th century Liberty style when the hotel was fully refurbished. With an immediately identifiable style in keeping with the magnificent architecture of the villa, it’s easy to see how, within the walls of our salubrious guest rooms, neither the summer heat nor the vibrant atmosphere of the hotel’s public areas can invade the privacy of these 19th century habitations. Take the Grand Hotel Villa Politi Siracusa Online Video Tour for a true taste of one of Italy’s most unique and prestigious 4 star hotels.

Sicilian valleys of flowering almond – Enjoy a spring/early summer excursion around the highlights of the south of Sicily. A magnificent colourful landscape with a classic and mythical character awaits you. It combines the awakening of nature with a journey that, in addition to the pure beauty, also includes extraordinary artistic and cultural treasures. Walk with us through the “Valli della Sicilia of flowering almond” and discover the most beautiful season of the year.

*Splendid array of flowers in the Valley of the Temples in Agrigento,
* Almond delicacies,
*Villa Romana del Casale,
*A visit in a processing enterprise for almond products,
*1 folkloristic evening with sparkling Sicilian music,
*Walk through the historic center of Syracuse and Noto,
*Walk in the canyons of Noto Antica and the almond valleys in the southeast.
ready for your content.

Bar Winston offers a delightful selection of classical Italian aperitivi such as Spumante and Prosecco; and digestivi such as Amaro and Limoncello; as well as a selection of cocktails and fine wines throughout the evening. A great rendezvous point or setting for an evening of gentle relaxation, our hotel bar, which is open all year round, also serves a fine selection of foreign liqueurs such as brandies, whiskies and vodkas.

Ways...of living, eating, dreaming. A different way to live, to eat, to dream and to cook. Our chef, Corrado Mazara and his team give you a hearty welcome. According to a philosophy which considers the taste of good food as an important added value to the stay in the hotel, the Grand Hotel Villa Politi offers its guests an exclusive catering experience, which can satisfy the most demanding palates.

The various indoor rooms of the restaurant: "Laudien" "Churchill" "Veranda Spring", decorated in Art Nouveau style and adorned with chandeliers, sumptuous, neoclassical architecture and frescoed ceilings, can accommodate up to 300 people. The outdoor space named the "Park of the Latomies" is suitable for large buffet functions in the midst of and surrounded by unspoiled nature.

With an abundance of outside space making up the complex of the Grand Hotel Villa Politi, the jewel in the crown of our exclusive 4 star hotel in Siracusa is our spacious outdoor pool and bar area, which is open from April to October and is itself surrounded by the verdant shrubbery of our private parkland. Built within a naturally occurring amphitheatre and amidst caves carved into the rock to hold Athenian prisoners nearly 2,500 years ago, this top quality Siracusa hotel is truly unique.