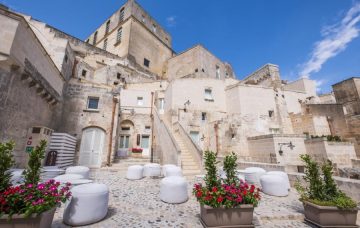 Certified Gold: Official 5-star properties that excel where their contemporaries lag with excellent reviews, usually award winning & a taste for the finer things in life.
From
£399 per person
Limited Availability
ATOL Protected

Aquatio Cave Luxury Hotel & Spa is a charming new 5-star hotel that brings the unique experience of a relaxing break in one of the world’s oldest cities to life: Matera, the 2019 European Capital of Culture.

AQUATIO CAVE LUXURY HOTEL & SPA – At Going Luxury we constantly receive special offers for this delightful property so give us a try. Get in touch with us via live chat, email or phone to check the latest offers for your holiday requirements.

The Aquatio Cave Luxury Hotel & Spa rooms, bars and external areas cover an overall area of 5000 m2, making up part of the Sassi district, which also includes a wonderful spa with a swimming pool carved into the rock, a restaurant with an outdoor courtyard and a multi-purpose hall, suitable for meetings of up to 50 people.

Matera’s spectacular network of Sassi – old, often crumbling cave dwellings now re-appropriated into hotels, homes, galleries, restaurants, bars etc – are some of the most beguiling sights to behold in Italy or in fact anywhere. Relatively untrodden by the tourist circuit until recently, this UNESCO World Heritage city, made of ancient limestone enclaves perched up upon a cliff in the middle of the Basilicata region, is well-worth the trek.

Naturally, you’ll be staying in one of these Sassi, the just-opened Aquatio Cave Luxury Hotel & Spa, which is formed of a modest 35 rooms designed by architect and artist Simone Micheli. White, gallery-style modern interiors sit in under craggy limestone walls, all domed archways and secret nooks, allowing the ancient architecture to speak for itself. To say that this spot is a romantic one is an understatement, made even more so by the possibility of candlelit alfresco dinners of traditional Basilicata fare under the stars and an indulgent visit to the cellar spa for a steamy (literally) soak.

Pry yourself away and you’ll find that Matera, which has been selected as a European City of Culture 2019, has a fascinating history and plenty of sights to see tucked in amongst its jagged, crumbling stone and cliffs – explore traditional 18th century dwellings at Casa Grotta di Vico Solitario, take in the haunting quietude of cave churches, scope out modern art at MUSMA (housed in a 17th century cave palace) and wander down the ravine to glimpse views of the city looming back over you.

Voted 2019’s European Capital of Culture, Matera has begun to pique the interest of Italophiles everywhere. From a distance, the city appears straight out of a fairy tale, with stone houses stacked on top of one another and a whimsical cobbled main street winding its way up to the cathedral. Not only a place of culture, Matera is one of the world’s oldest continuously inhabited cities, which means it’s positively bursting with history. Visit in July to make the most of the Italian summertime and long, light dusks, which can be spent outside of a ristorante, red wine in hand.

Stop for a drink at the hotel bar.

You will be intoxicated by the typical aromas, flavours and colours of the Basilicata region served up by our restaurant at lunch and dinner, which also has secluded outdoor seating. Savouring our cuisine with an excellent wine from our cellar as you dine by candlelight, alone or in company, beneath the stars in the heart of Sasso Caveoso, immersed in its history, is a singular and memorable experience.
Rooms
Facilities

24-hour reception; room service; internal bar; free Wi-Fi, tobacco and newspapers available in the reception area; free access to the SPA (for visitors over the age of 16) with sauna facilities, Turkish baths, a heated pool and fitness centre. An unmanned car park is situated close to the premises with a shuttle service to the hotel; air conditioning and heating; TV room; 50-seat meeting room; concierge service.

Nowhere is this better expressed than in the 500sqm space where the SPA is located; an evocative area occupying the very heart of the complex, restoring underground spaces which have been traced back to the ninth century. The largest cave space contains an infinity pool which has been plastered using traditional techniques. The old recovered cisterns have been transformed into sensory showers and some of the lounge-beds created from ergonomically shaped tufa. There are also massage areas for individuals and couples, hammams, sauna baths, beauty-treatment compartments and relaxation areas.

Water is thus still present, reminding us of the ancient basins that were located all along the ridge and used daily by the quarter’s inhabitants from which the ridge derives its name, now transformed to offer a luxury service dedicated to our guest’s well-being.